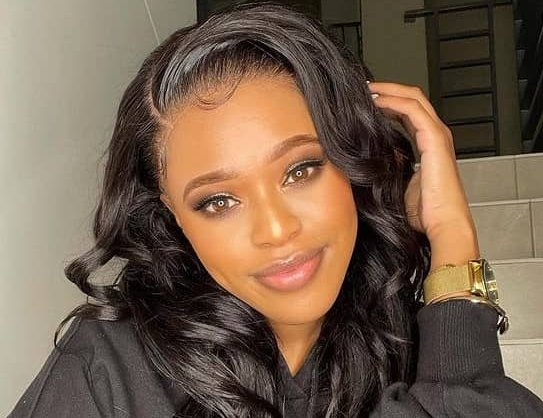 South African television actress Natasha Thahane has begun the countdown to her big day. The star will be turning 26-years-old in two days. Her birthday is on the 25 of September.

In 2020, the Blood & Water actress went all out for her 25th birthday. She threw her party at the popular River Meadow Manor in Pretoria. In attendance were the likes of Mohale Motaung and Somizi Mhlongo but to name a few.

Following the celebrations, Natasha described her day as magical. She also thanked everyone who helped make her special day possible.

“Thank you for all the birthday wishes Yesterday was magical. Thank you @siyandasabelo for your hospitality at the @rivermeadowmanor. Thank you @nono_events for the beautiful setup & pulling this off nge last minute,” she posted.

She stunned in a number from acclaimed fashion designer Quiteria. Later on in the day, she got into a new outfit. Taking to the stage were the likes of Donald and Ringo Madlingozi.

Through a recent Instagram live, Natasha’s bae and Orlando Pirates midfielder Thembinkosi Lorch told his fans that he is now a single gent. This left many of his fans confused as we’re all under the impression that he is happy in his new relationship with Natasha Thahane. “Ai mina guys I am single. I am looking for someone to marry me,” he said on IG.

This was followed by a message from the actress saying that she was going through something hectic. “Never been so calm in the middle of a storm. It can only be God,” she said.

Another celeb who celebrated their birthday was none other than Ntando Duma. All the big celebrities including Lasizwe Dambuza, Sicelo Buthelezi, Naak Musiq and Robot Boi were in attendance.

Sbahle, who wore matching outfits with her mother shared a few heartfelt words on the day. ” I love my mummy because she is my best friend.” She said. “I very very like my momma.”

It appears Ntando Duma and Natasha Thahane do not see eye to eye. This comes after an episode of Drink or Tell The Truth on Lasizwe’s YouTube channel.

The host asked Duma if things were cool between her and the former Skeem Saam actress. “Back in the day you and Natasha were close friends. Why are you guys not friends anymore?” Ntando looked annoyed and was reluctant to give an answer which gave viewers the impression that things were not that well between the two.