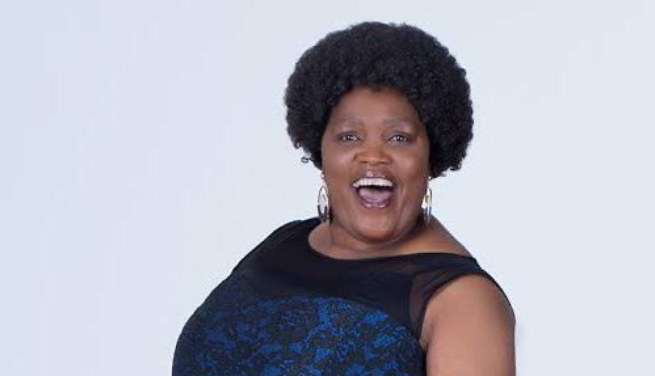 The entertainment fraternity and the country at large is still mourning the untimely passing of Skeem Saam actress Nokuzola Mlengana, better known to many as Sis’ Ouma.

The actress, who joined the SABC1 6:30PM sudser in 2014, passed away on Monday, 12 July. It has now been revealed that she had pneumonia, which is her cause of death.

Family, friends, colleagues and viewers of Skeem Saam are still struggling to come to terms with the passing of Mlengana. Tributes and messages of condolences have been pouring in since the news of her passing, and they have not stopped.

Former Skeem Saam actress Natasha Thahane reminisced by sharing a video of her and the late Sis Ouma on set where she was singing her praises. “She is disciplined, she likes her job, she likes people. I remember when I was down she’d say. ‘mommy let’s pray.’ Then we pray then I come right and do my work for the day,” said Nokuzola about Natasha in the video.

Innocent Sadiki, affectionately known as Sthoko in the soapie, has expressed that she has been struggling to come to terms with the passing of her co-star: “The pain is unbearable! Lord, please give us answers. This is just tooooo much. RIP Mama. May your soul rest in peace.”

Not only was the 58-year-old actress loved on-screen, but she was dearly loved off-screen too — especially by her family. Mlengana was a sister, mother and grandmother. Her eldest daughter, Nonzaliseko Toni, told Daily Sun that it was hard to believe that her mother is nomore.

“The family is still in disbelief because she was a fighter, and no one thought it would come to this,” she said.

Toni described her mother as a very resilient woman, and one with a heart of gold.

“She was a very courageous and strong woman who believed in prayer. She was bold and had a heart of gold. She loved her family dearly and would do anything for those she loved.

“She hated seeing others in distress and always wanted to help. She was a hard worker,” she said.

Nokuzola’s character, Sis Ouma, was not a fan favourite when she first debuted on our screens, particularlye because she was a nosy security guard who was always in Kwaito and Tbose’s business at Gauteng University — which was where the two fan favourites went to further their studies. Many people also hated that she could not see through Lelo’s conniving and scheeming ways, especially after she had put Kwaito through a lot of pain, including kidnapping and drugging him.

When she was moved to Turfloop University, viewers were worried that Sis Ouma’s character was going to be saying goodbye, but as luck would have it, her character grew. She became MaNtuli’s friend (in a way that nobody quite understands) and that is how viewers started warming up to her character.

“We spend so much time together that eventually work colleagues turn into family, so I think I can speak on behalf of everyone when I say that we are all feeling a little broken. To lose colleagues is a huge loss to us. We still miss the people that we’ve lost.

“I think she will be remembered differently to different people. To some, she was a mother-like figure because of her loving nature, and to some she was a teacher that you could look up to,” Mogola said.

Although the full details about her memorial service and funeral have not been confirmed, she is expected to be laid to rest on Friday, 16 July.

Ntsiki Blamed For The Violence