Amanda Black Accused Of Being Woke To Sell Album

Amanda Black Accused Of Being Woke To Sell Album 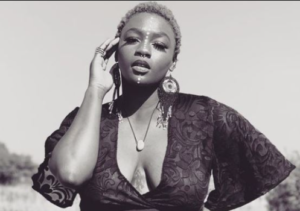 Idols SA alumni Amanda Black released her album on Friday and we are loving it. It has such a chilled, healing vibe that we absolutely appreciate.

People are receiving the album very well. These were some of the reactions:

“Amanda Black deserves everything! She literally never misses with albums”

“Amanda black is that gurl that she thinks she is, like yhu 3 good albums”

“@AmandaBlackSA this album is the calmest music offering I’ve heard in SA in a long time. BUT It end too quickly. I guess it will be on repeat for a while. Thank you for the music #WeAreTalented”

However some people have been accusing her of tweeting woke things as of late to run those album sales up but some people have come to her defence to say that she has always been woke even before the release of her album. 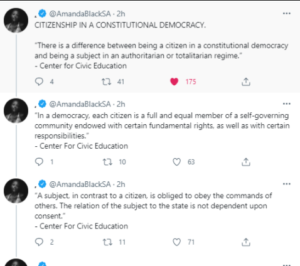 “KNOWLEDGE AND SKILLS. Constitutional democracy requires informed and effective participation by citizens who understand and have a reasoned commitment to its fundamental principles and values, as well as a familiarity with its political processes.”
– Center For Civic Education

I still do NOT take back what i said about @CyrilRamaphosa encouraging the mass killings of black people in phoenix. I lament and my heart still breaks for all the families who lost their loved ones through these senseless,racially driven murders. Black lives still matter to US! 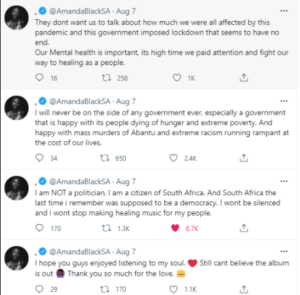 This is what people said:

“What is wrong with dragging politicians names in the mud to sell albums? Amanda Black is highlighting the obvious. The timing is perfect and coincides with her latest offering. These politicians drag the dignity of black people in the mud on daily basis. I see nothing wrong”

“Activists have no agenda. Politicians do. All Amanda Black does is advocate for ethical governance. Is that too much to ask? And once again feel free to use your platform to praise the government for all the good u SEE! Allow us to criticize. Its not a crime. We have a right to”

“Knowing the oppressive regime of Cyril Ramaphosa, Amanda Black will probably be black balled by the industry if we don’t protect her.. they will try and shut her out as an example to other artists, she’s one of our own now, we need to ensure that we protect our own”

“Amanda Black is those annoying left wingers who are schizophrenic and think they are wise and everyone else is either dumb or captured. Those 5G covid people”

“Shame Amanda Black is trying to be like Ngizwe. She thought by criticizing the president, she’ll become relevant again. She is actually playing with fire. I also don’t support what happened in #PhoenixMassacre surely the president cannot condone such acts. Uzoboshelwa ukuphapha”

“Amanda Black thought that the best way to sell her new album is to insult the president and accuse him of murder, She’s dom”

“Stop being stupid, Amanda Black has been tweeting about current affairs way before her album drops. Politics is way above your room temperature IQ , stick to twaring with other catfish accounts”

“Amanda Black must be protected! By any means. The revolutionary spirit has got her. And many will be agitated by the truth she’s uttering, uncontrollably so. Akazenzi ungokhethiweyo. It’s her season. #AriseAmandaArise”

What do you guys think? Is Amanda doing this for album sales or she really is fighting for people in her own way?