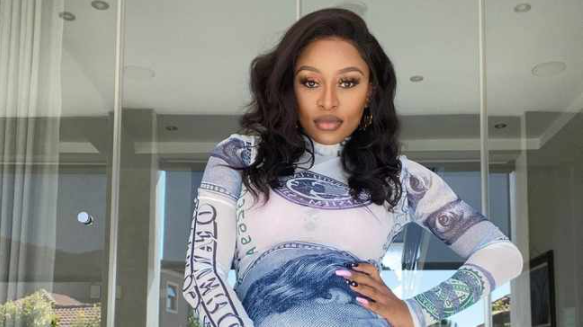 Fans are counting down the days till DJ Zinhle: The Unexpected premiers but whilst that happens, Murdah Bongz cannot stop gushing over the mother of his child, DJ Zinhle.

Murdah Bongz shared a gorgeous picture of DJ Zinhle and expressed how grateful he is of her. He wrote a short prayer thanking God for her, “My God, Amen.”

DJ Zinhle on the other hand is in disbelief over her pregnancy look, laughing at how much she has gained weight. Weight gain is a normal occurrence during pregnancy and DJ Zinhle is experiencing it in abundance. 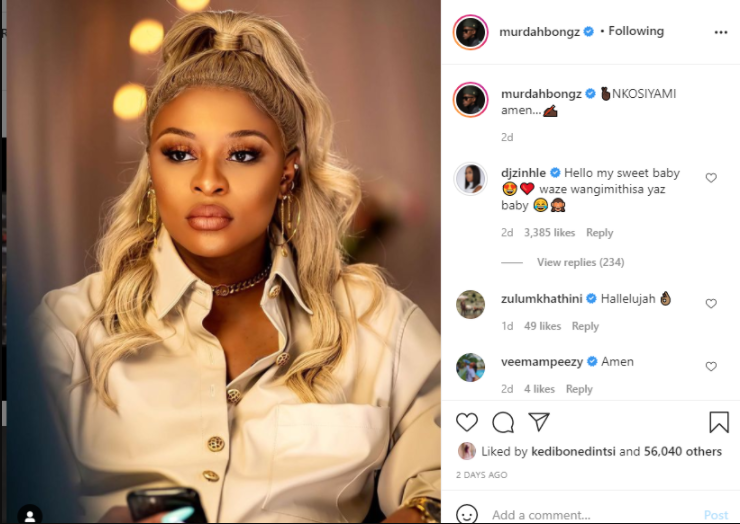 She commented on Murdah’s post laughing at how pregnant she is. Even on Twitter she commented on another picture, where a fan declared her their #MommyCrushMonday.

. @DJZinhle chats to us about why she decided to do a reality show: "I don’t think people understand how close I am to my family… but this is something that’s going to give them that perspective."https://t.co/hYOtMOHtha

Despite the pregnancy glow and weight gain, DJ Zinhle is also going through all the pregnancy symptoms, but she revealed in an interview that Bongani Mohosana has it worse than her. She told TshisaLive that he experienced back pain, morning sickness and fatigue, which is a another normal occurrence for the partner of a pregnant woman to experience.

“The one thing to note about Bongani in the pregnancy is that he’s gone through all the phases that anyone could go through in pregnancy. He had morning sickness, he’s been sleeping a lot, his back has been killing him. I experienced those things a little bit but he was the one throwing up and all of that,” she revealed.

But one thing’s for sure, DJ Zinhle will not have to experience any of this anymore because according to her, she has had enough of pregnancy and has decided to call it quits. “This is the last one. That’s for sure. It just takes so long to make a baby. If it took a shorter period maybe I’d have another one but I think I’m done. This is it for me.”

On social media, fans cannot get enough of the couple saying they are definitely couple goals. They too cannot wait until the debut of their reality show where Africa’s number 1 Female DJ will be letting fans into her home and into her family affairs.

Zinhle was very wary of doing a reality show because she is a very private person. Also the fact that her close friends are Pearl Thusi, Moozlie and others, who are also public figures who have their own private affairs so she considered all of those factors.

Zinhle is a hard worker even during her pregnancy she still pushes all of her businesses and is also excited as she is launching Era By DJ Zinhle physical store at Mall Of Africa on September 1. How does she do all of this when she is at the final stages of her pregnancy, well she told True Love that she wants women to see that they can do it all even during pregnancy.

“Sharing my intimate journey such as my space or my pregnancy is something I’ve never done before and I felt that doing it this way was important. I wanted women to understand that just because they’re pregnant, it doesn’t mean that their lives have to stop.

“That’s the narrative that I wanted to share – that I am DJ Zinhle but I’m also a mom, a friend and so many other things, and that’s what I think makes this show special,” she told the publication.