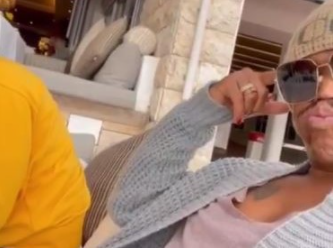 South African television and radio personality Somizi Mhlongo has had a challenging 2021. Since the beginning of the year, there have been reports about the messy divorce between him and his ex Mohale. The reports were confirmed after a recording of Mohale opening up about their marriage was leaked. This saw Mlhongo lose out on so many gigs, including Idols South Africa.

As a result, he has had to work extra hard to afford the flashy lifestyle he leads. He has been emceeing at events over the last two months or so. More recently, he revealed to his followers that he is jetting off to the Western Cape for a holiday as he’s been working extra hard

“It really feels so good to have our national airline back…..may it never stop flying again… 🇿🇦🇿🇦🇿🇦🇿🇦. As I fly off to western Europe of South Africa to reward my body and soul for a few days,” posted Somgaga.

Following the viral leaked audio clips about abuse in their relationship, Mohale issued a statement denying that he did not intend to have their private affairs in the public. The statement reads as follows:

“I wish to make it clear that it has never been my intention to have the private details of my marriage exposed in the public nor will it ever be my intention to cause disrepute to his image. While I have maintained my silence in the hopes of amicable dissolution of our marriage, recent developments compel me to make the following assertions.

1. “The conversations heard in the audio were privileged as they were with one of the producers of Living The Dream with Somizi. I trusted the person with whom I was engaging and did not divulge such details for any material gain. In these conversations, I was laying case to reason why I would not want the details of our divorce to be used in the upcoming season of the reality show as this would not reflect the complete truth and furthermore, did not want the details thereof to be used for financial gain.”

2. “Myself and the person in question had a personal relationship that was built over years and I felt secure relaying my experience to him having been assured that it was privileged. I never imaged that my turmoil would be exploited in this manner. Since the release of the conversations, I find myself stripped of my agency and the right I had previously reserved to tell my story when I was ready.”

3. “I did in fact experience abuse at the hands of my estranged husband both physical and psychological. It is not my wish to seesaw my experience against his as he only has his conscience to reckon with.”

Responding to the accusations from Mohale’s audio clip through a statement, Somsom said that never in his wildest dreams did he think that he has to defend his honour as a result of someone he loved so deeply.

“Never in my wildest dreams did I think that one day I would have to defend my honour as a result of someone I have loved so deeply and so genuinely deliberately harming a reputation I’ve worked so hard to build. For the most parts of my life, I’ve kept my relationships out of the public eye until my one and only marriage which you witnessed on television and other social media,” read the statement in part.