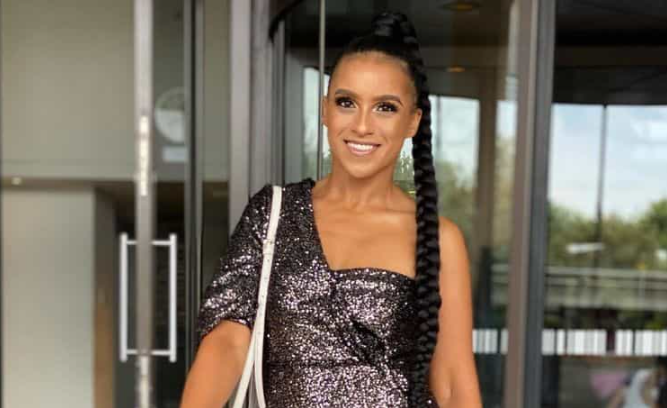 Real Housewives of Durban star, Kgomotso Ndungane has lost a loved one. The beauty has taken to social media to open up about it. “It was just the other day when we were planning for a wedding celebration, Covid happened – and all the plans were on hold.” She said and just as they had started planning again, anaemia took her brother’s life.

Kgomotso has revealed that she is not okay this morning as they travel to bid him farewell. “As we started planning again, anemia robbed us of your life, my brother. Today as I travel to bid you farewell, I am not okay. I am torn for my sister, for your young kids and I feel so sad.”

Just not so long ago, they were planning his wedding celebration and today they bid him farewell. “From planning a joyous wedding celebration, to now bidding you farewell is the most traumatic experience we could have once again be dealt with as a family. In a space of 2 yrs, we have now lost our grandparents, we have lost 2 aunts and now a brother in law. Rest In Peace Sbu. We will just trust in God always.”

Kgomotso, who gained popularity on the Real Housewives of Durban before announcing that would not be returning to the new season.

The last couple of days have been extremely difficult for the nation as we mourn the death of beloved television actor and director, Shona Ferguson. He passed away this past Friday at Milpark hospital following a long battle with Covid-19.

Connie’s audio clip was played at Uncle Sho’s funeral and it touched many. The Queen actress revealed that never in a million years did she think that she’d find herself in that position. “Never in a million years will I have thought that we, In this position that I am in today, speaking as I am today without your physical presence. Sho, I thought you and I were going to grow old together, that’s what I saw for myself, that’s what I saw for us, that’s always been the dream and that’s where I thought you and I were going. I never anticipated where we are today. God brought you into my life 20 years ago on the 21st of July was exactly 20 years that you and I have known each other and I anticipated another 20 years with you.”

She further said that she had thought that the two of them would grow old together.

“I really thought you and I were going to grow old together I remember re bona bakgolo ( the elderly) in Cresta ne ba tsamaya ba batshwarane ka matsoho ( they were walking holding hands) and we looked and them and ho “look at us in a couple of years” and then we would hold hands if we weren’t holding hands already. I nursed you for 4 weeks, 28 days to be specific…”I have never known anyone as strong as you Sho, how I saw you at the hospital, how you fought, I just want you to know that I am so proud of you, never known anyone with your fighting spirit, even in that hospital bed, you defied the odds so many times…I am hurting right now my heart is bleeding,” said Mam Connie in part.

Nonku Celebrates Her Birthday In Style