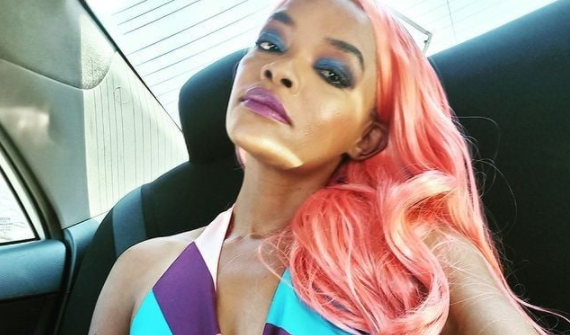 Kuli Roberts was Mac G’s recent guest on his Podcast and Chill, which now broadcasts on Channel O. Her episode did not entice avid viewers of Mac G’s podcast, with a handful of people saying it was boring. Nonetheless, she made some pretty eye-opening statements, and taught people the importance of embracing people living with albinism.

The woman who goes by name of ‘Stop Albinism Killings’ on Twitter, showed just how passionate she is about this cause. Mac G asked her about it and said he has never seen a hashtag dedicated to albinism awareness. Kuli reiterated that she has made it a lifestyle for her to advocate for albinism and does not want it to just be a trend.

In the clip shared by Channel O she says, “I don’t put a hashtag, it’s a way of life,” she then adds that she does not wait until albinism awareness month, to start advocating. She believes if she does this every Thursday then it will gain momentum, just like how every Thursday she dedicated it so ‘happy lesbian Thursday.”

She says she does this because she wants to educate the black homophobes, and let them know that women also do date each other.

“The reason I say that is so that the black man who is a homophobe can know that there women who like other women. Because as black people, we like to use tradition and culture and all sorts of excuses for weirdness.

Kuli also made viewers chuckle a bit when she revealed that DJ Sbu actually used to call her ‘grootman.’ “DJ Sbu calls everybody Grootman. He accidentally called me me Grootman. I was like, woah.”

The last time Kuli made headlines was when people expressed concern for her “dramatic weight loss.” Speaking on the hate, she said “It’s quite funny though, that people who are talking about me being skinny are the same people who are wearing cycling shorts under their clothes because they are not comfortable about the way the look, Truth is, everybody want to be thin.”

“Back in the 90s people used to tease me back I am dark skinned. Some said I was so dark ingathi ndisuzwele yi donkey ebusweni (as if a donkey farted in my face). Then people said came from a well-off family why didn’t I bleach my skin and look like Mshoza and I said no. Now they talk about my weight, I don’t care.”

Mac G on the other trended for the revelation he made about his ex girlfriend Lamiez Holworthy. Many people did not know he and Lamiez used to be an item, but now they do. He said the reason they broke up is because she was getting too serious as she wanted to introduce him to her parents. “She wanted to introduce me to her parents and sh*t, then I said nah I’m gone,” he revealed.

He said he felt very bad for leaving her because he could see that she was very much in love with him. He also was about to reveal more on their relationship, but Sol interrupted him.

“I thought we were just having fun but then I realised that no she is taking things very serious.”

"You didn't smash, so it doesn't count…" Sol Phenduka pic.twitter.com/3YmkjVLPT9