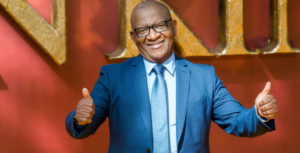 Lion King creator Lebohang Morake spoke with Sunday World about his marital affairs which involve his ex-wife Nandi Morake, who now goes by the name Ndlovu-Goodjohn. The reality star and his ex-wife are not in good terms despite getting divorced 14 years ago.

Nandi is the mother of his three children, and their late son Thembalethu Morake who was only 14 months old at the time of his passing. Their feud continues till this day and Lebo revealed to Sunday World that Nandi had cheated on him several times whilst they were married.

It is reported that Nandi allegedly cheated on Lebo in 2003 with a female employee of his and this happened many times.

Not only that, but Nandi allegedly had an affair with the husband of their children’s dentist when she moved to the States in 2004. This did not sit well with Lebo as this man was married to their family dentist. Upon leaving for the States, Nandi filed for a divorce and was free to date whoever.

“My kids could see this man during the day when they went to consult because he was a frontline manager at his wife’s medical centre and they would see him at night sneaking into Nandi’s bedroom. I found this to be morally wrong,” he told the publication.

“When I went to LA to see the kids, I confronted her and said, ‘Nandi I know you and I had separated and you could see whoever you want to see, but it is morally wrong for you to have an affair with the husband of our children’s dentist,” he said in the interview.

The two had made many attempts to rekindle their love however that did not work.

Just a few days ago, more details about Lebo M’s son’s death was revealed. Sunday World reported that an autopsy relating to the death of the toddler, revealed that he had allegedly been sexually molested before drowning in their pool in Dainfern near Fourways, Johannesburg.

Thembalethu was left in the care of his 21-year-old nanny who was charged for his death. Nandi Ndlovu-Goodjohn, attended a friend’s funeral when the “accident” occurred while Lebo was holding auditions for Lion King.

At the time the law concluded that it was an act of negligence on the nanny’s part and she was then found guilt of culpable homicide in 2008. She got charged R3000 but now as Lebo digs deeper, his niece Tshepo Mboni confirmed to the publication that the baby was “raped and left to drown.”

This information is allegedly in the autopsy report which was leaked by a family member. In the report the doctor gives the description of the baby as well as the time and date which the incident occurred.

Cassper Nyovest dragged for making Mpura’s death about himself