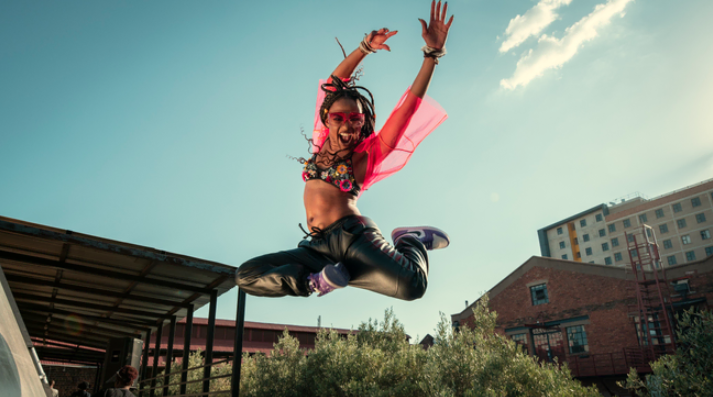 Noxolo Dlamini exudes this infectious energy. It was unmistakable during our virtual chat.

And goes without saying that her livewire personality sealed her fate in landing the role of Ntombi, a gifted street dancer from Umlazi, in Netflix’s critically-acclaimed dance drama, “Jiva!”

Ntombi’s dreams were upended when her father committed suicide. At the time, she was on the brink of landing her big break – an opportunity to tour as a dancer.

As such, her then-boyfriend Bheki (Zamani Mbatha) took her slot and became an overnight star.

Encouraged by her uncle Bra Zo (Tony Kgoroge) and her ride or die, Vuyiswa (Candice Modiselle), Ntombi decides to give her dreams one last shot by entering the fifth Jiva! Loxion competition as The Trollies.

“Jiva!” is Dlamini’s breakthrough role. She previously appeared in “Isibaya” and Liberty”.

When she was in Grade 7, she, helped by her drama teacher, secured a spot at the National School of the Arts, where she spent two years.

She then moved to Dominican Convent School as the competitive environment at NSA left her somewhat disillusioned.

“My mother, who has always been supportive of me, felt like my light was being dimmed at NSA,” Dlamini shared.

The move was great. The environment and sense of family at her new school made her love her craft again. 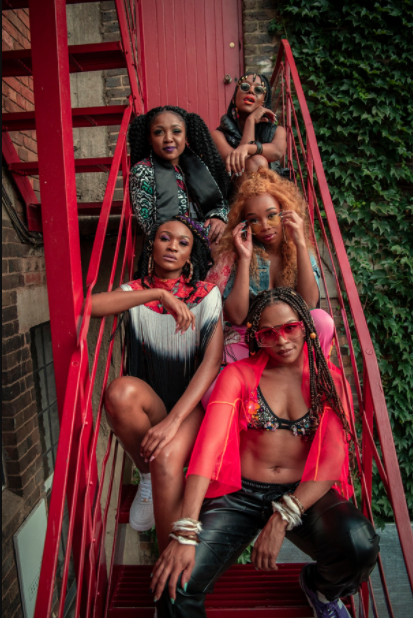 Back to “Jiva!“ she auditioned for the roles of Lady E and Zinhle. But, after getting a call back for the latter part, her banter with Scottnes L Smith (one of the directors) over the character veering into parody territory in the audition, got her cast as Ntombi.

She said: “I told him, I thought it was so stereotypical, the way I was asked to play the character. I’m from Soweto. Yes, there’s girls like this. But I felt like he wanted me to approach it in a very caricature way.”

Suffice to say, the director was grateful for the feedback.

On landing the part, she admitted: “What a pleasant surprise. But that’s when the work had to start because Ntombi is a gqom dancer, which is a style of dance I’m not used to and so I had to start doing my research.

“I had to start enjoying gqom music, which was very difficult. It sounded like noise at first. It’s crazy because, now, I really enjoy it.”

Having grown up in Soweto, she was able to connect to the township vibe.

She continued: “I had to then start to enjoy groove, which is a term used for partying.

“Also, the style of dance and how it is done in Durban is different. Tom London was absolutely amazing.

“He was like, ‘I saw you in auditions, I really believe in you and I know you can catch this style’.”

The founder and lead choreographer of Soweto’s Finest put her in touch with Bontle Moloi and it wasn’t long before they brought out the gqom dancer in her.

When it came to Ntombi’s setbacks, Dlamini says she dipped into her trove of personal experiences.

She explained: “There have been so many falls, where I had to pick myself up. I’ve always had my family for support and to help me regroup.

“I was in ‘The Lion King’ twice and I was let go. It’s almost like being rejected.”

Having lost her dad when she was three, she loved bonding with a father figure like Kgoroge on set.

Their shared love for salsa helped them connect and bring that chemistry to the screen.

Dlamini shared: “We supported each other. When one person was down, the others were there.

“In the story as well. When they all really show up for Ntombi, it is the most beautiful thing to see all these black women coming together to lift each other up.

“There’s a sisterhood they create. It’s so inspiring.”

Of course, the same could be said of Dlamini’s performance. It’s onwards and upwards for this rising star now!

“Jiva!” is currently streaming on Netflix.