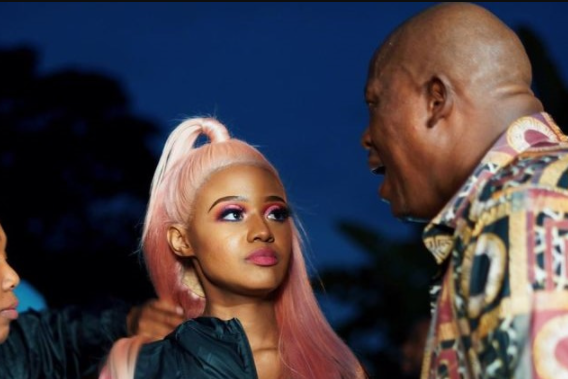 Babes Wodumo and Mampintsha’s reality show, Uthando Lodumo has found a new home. The reality show made it’s debut on Showmax but now, people who are not subscribed to the streaming service will be able to watch the reality show on Mzansi Magic.

The reality show documents the couples tumultuous relationship and how they stood strong until they wedded each other. The reality show came about when Mampintsha dropped on one knee and proposed to his long term girlfriend during a radio interview on Gagasi FM.

According to Babes Wodumo’s manager, her sister Nondu Simelane, the show will allow Babes’ fans to watch the show as they could have missed it when it aired on Showmax. She spoke to Daily Sun and said, “Many viewers don’t watch Showmax as they can’t afford it. We know there are a lot of people who wanted to watch the beautiful love story of Babes and Mampintsha but couldn’t. Now is the perfect opportunity for viewers to watch.”

When the show got released, Nomsa Philiso, MultiChoice Channel Director – Local Entertainment said the couple had been at the centre of abuse allegations but that does not mean they condone abuse, “Babes and Mampintsha’s relationship has not been a fairy tale romance. They’ve had serious issues as a couple, yet have chosen to remain together. The show focuses on how they have overcome their challenges, working through them with their families.”

“We do not condone any form of abuse or gender-based violence, but we believe that South Africans need to start talking honestly about these issues and confronting them.”

Lately, Babes has been cyber bullied by her trolls who also said she is down and out and no longer relevant. But she has always been on a mission to prove her haters wrong by touring outside the country. As quoted by Daily Sun, Nondumiso Simelane said it hurts when people say Babes is nothing but a local artist, hoping that with this international gig, her haters will be gagged.

“Babes does not limit herself. Clearly those who think she targets only local don’t know her. She’s going to Kenya and that’s good because she is going to prove them wrong,” she said. Speaking on claims that she is neglecting her son, her manager said, “Babes needs to work to provide for her son. And she has a very supportive family. So working, which includes travelling, does not affect anyone including the baby. She’s a caring and loving mother.”

Many thought Babes’ shine was stolen by Kamo Mphela but she shut down those rumours and wished Kamo Mphela well, “Super proud of you @Kamo. Keep shining Baby.”

The love-hate relationship between her “fans” started when she slammed single mothers who judge her, “You see this thing of crying about your baby daddy who left you, don’t do that with me. I got married then I had a child so don’t compare yourselves with me. Do not compare your baby daddies with me. This has nothing to do with me. Your baby daddy made your pregnant then left you with the baby, I wonder why you gave birth at a very young age. So I don’t want nothing to do with that,” she said while dancing.