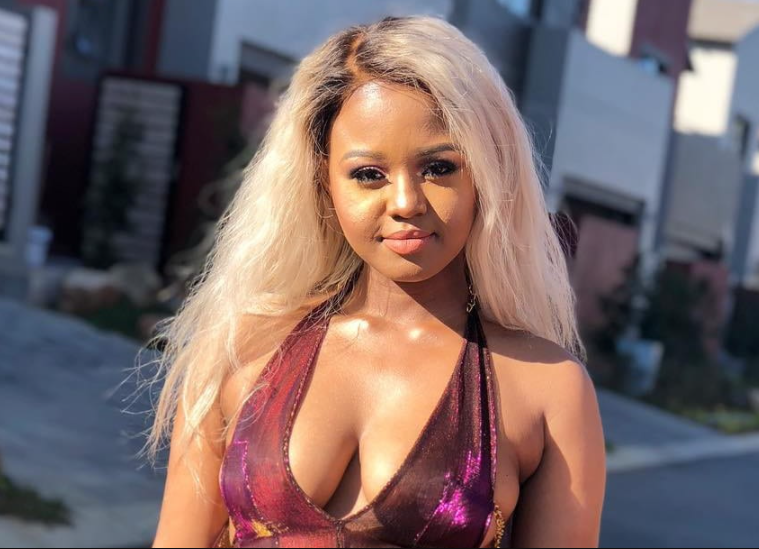 Gqom musician Babes Wodumo has been trending for all the wrong reasons this week. If it wasn’t social media users speculating the reason for her apparent downfall, it is a video of her screaming and pleading for help whilst the South African Police Services (SAPS) tried to intervene.

The video was first shared by a tweep who then took it down after it gained traction. It shows a very disturbed Babes Wodumo screaming for help in the presence of the police. It was apparently taken by witnesses at a Shell garage in Westville and she was on top of the police van. The police are heard urging her to get inside the vehicle.

The user who shared the video goes by the handle @ky_bizana and he wrote, “Heartbroken after seeing @BABESWODUMO this drunk in Westville this weekend, cops tried to help but she kept screaming help.”

Fans are worried about Babes with some speculating that she might have been drunk, stressed or in danger.

Mampintsha is busy on social media promoting his new music and his West Ink company.

Her manager Sbu Ncube said Babes was shooting a music video. But what’s confusing is that the person who shared the clip did not mention that there was a camera crew or that anything was acted out.

On social media, some tweeps are arguing that the woman on the clip is not mama Ka Sponge.

She turned off her comments section on the post which has been shared 145 times and received 3.9K reactions.

So there you have it folks, Babes is safe and not in any danger.

Babes is also trending on Twitter after Kamo Mphela shared a clip of her performing at the United Kingdom. Many feel as though she could be living the life Kamo is currently living but in Babes defense, they are both running their own race in their own pace and in their own lanes.

Kamo Mphela shared a video of her fire performance of her hit single Nkulunkulu in London, UK, but Babes Wodumo trended along with her.

“Kamo Mphela is living that life we all wanted Babes Wodumo to live.” said a tweep. Another one said “Babes was supposed to be a superstar. This is why indoda must never even be your top 3 priority please put him the by 5 or 7.”

Fans reckon that Mampintsha is to blame for her “downfall” saying that had she not settled down and gotten married, she would be far ahead in life. But others are defending him saying she got these opportunities because of him.

Babes Wodumo blew up and made lot of money because of Mampintsha.

If it wasn't for Shimora babes would be wash up like the rest of y'all nama weave ashwabene..

Posting "Indoda Must" the whole day

Tweeps are at it again giving us their washed up opinions on Mampintsha and Babes Wodumo pic.twitter.com/uh5xAvKhZQ

How did you people arrive to the conclusion that the reason Babes is not a superstar today is Mampintsha. I would like to understand the method and the formula that led to these conclusions.

Without Mampintsha Babes was not going to be a super star.

Infact the only reason we know of Babes Wodumo is because of Mampintsha. pic.twitter.com/7MKsBcLPi5

Babes and Mampintsha and happily married.. mind ur own. pic.twitter.com/9XmUpejury

She's literally mothering her new born, people are weird…also I highly doubt she couldn't come back in the game if she wanted to, I mean she's Babes Wodumo and her husband is Mampintsha😂🤷🏾‍♀️ https://t.co/IDapTqkvMy

But she was a superstar when her genre was still popular…now its Amapiano! This has nothing to do with Mampintsha. pic.twitter.com/yKxHPUywDc

LADY DU OPENS UP ON HER MUSIC JOURNEY