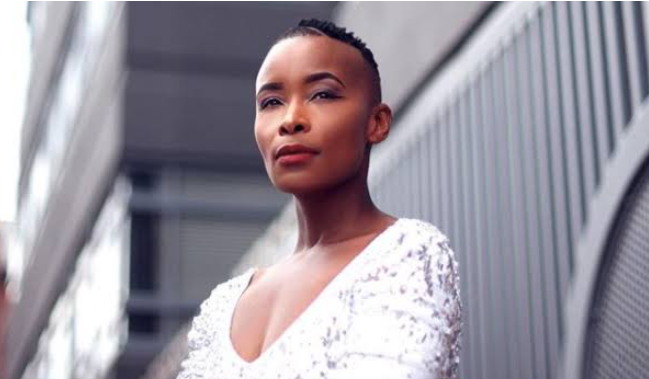 The former president Jacob Zuma’s daughter Dudu Zuma-Sambudla has been dragged on Twitter. Dudu is accused of inciting violence.

She tweeted a video that shows multiple cars burning with a caption that reads: “Mooi Plaza…We See You!!! Amandla!!! #FreeJacobZuma”

Actress and TV presenter Bonnie Mbuli slammed Dudu for the tweet, she responded: “This is appalling, nothing to celebrate here, nothing Amandla abt it, it’s despicable!”

@Lindormabaso said: “How can you applaud for disruption of someone’s property? The same mess you are cheering up for will create a lot of uncertainties for the same people you are encouraging! These companies will have to recover those assets probably some will lose their jobs”

This is appalling, nothing to celebrate here, nothing amandla abt it , it’s despicable!

There has been an uproar on social media and around the country since the arrest of the former president. His supporters are calling for his release.

Several celebrities have also taken to their social media platforms to show their support for him.

The former president is serving 15 months in prison for contempt of court in his corruption case. He handed himself to the police earlier this week.

Here is what Mzansi celebrities had to say.

Musician Lvovo Derrango
“After 1 Billion. The only arrest is of an 80 year old, retired, pensioner… For what? for failing to appear at the circus! 2021.”

Singer Brenda Mtambo
“Mhlaba wethu, Siyakhuleka ubaba uMsholozi aphile (Our nation, we are praying for Baba Msholozi to live). Something is not feeling right with him in jail. I feel sad for some reason,”

“Inkululeko ngayilwela angiyizwa ngendaba,” which translates to “I fought for freedom I don’t just know about it,” AKA captioned Jacob Zuma’s picture on Instagram.

Actress Gugu Gumede
“Nxamalala, our family will always appreciate the emotional support you gave us during and after my Mom’s ailment. Those visits and check-ups went a long way. When many turned their backs on us, you did not. This will forever be a testament to your character. Yima njalo Msholozi.”

Singer Zandile Khumalo
Zandile wrote a lengthy Isizulu’s post which simply translates to: “My grandmother always said don’t ever laugh at another man’s unfortunate circumstances because it does not matter whether you think of yourself as innocent because everybody has faults. I’m so sorry baba, I can only imagine what your kids are going through. Stay strong and I pray God is with your family.” 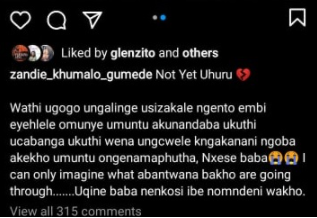