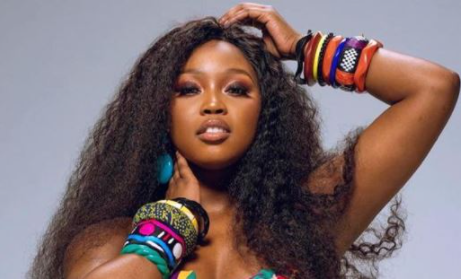 Nelisiwe Sibiya has received a nod of great work at the Scream Awards, Africa’s biggest all youth Awards.

Taking to Instagram, the Durban Gen actress announced her win and thanked her fans. She said, “Izithelo zomsebenzi, ukubekezela and prayer are showing 😭🕯🙏🏾Just woke up to these amazing news. My second award As an ACTRESS OF THE YEAR, outside South Africa 😭 which were held in Nigeria 🙏🏾🕯

Thank you so much to everyone that’s always praying for me. Ngyabonga guys izandla zidlula ikhanda 🙏🏾🕯 This award is for every Young Black Girl Who Has Nothing but Just a dream!! Keep on keeping Queen. There is no turning back 👑

@brendamtambo said, “Bhala bhala, congratulations Neli , seeing you win makes me so happy knowing where you come from , you’re truly gifted and now God is showing off ❤️❤️❤️❤️”

In April, Nelisiwe won her very first award in acting. The 28-year-old actress popularly known for her role as Dr. Mbali on Durban Gen won The Best Actress in Africa award at Zikomo awards in Zambia.

Sharing the exciting news with her followers, the Nomathemba hit-maker posted a video of her trophy on Instagram with a caption that read: “Thank you so much for voting. I got my first award in acting from @zikomoawards in Zambia. Best Actress Africa.”

She said her award is dedicated to all black African girls who have dreams.
“This award is for all the young black Africans who have nothing but just a dream. All those who never sleep trying to reach their goals. All those who have to work 10 times harder because they are the ones who must change their lives and of their families. Thank you for voting for me. Ngyabonga.”

Speaking about her Durban Gen role on Instagram months ago, Nelisiwe said it reminded her of her mother’s last days in the hospital.

She shared a video of one of her scenes with a caption: “Shooting these hospital scenes was so close to my heart. And now they affecting my family. I went all OUT bringing this to life as They were always reminded of my late mother’s last days at the hospital, how much she fought sickness which was said to be cancer. She fought ey. She honestly thought she would be better Kanti no Death was too stronger than her. It was time.”

Congratulations to Nelisiwe for her win once again. We love her on Durban Gen.

Makgofe Moagi Shows Off Her Son