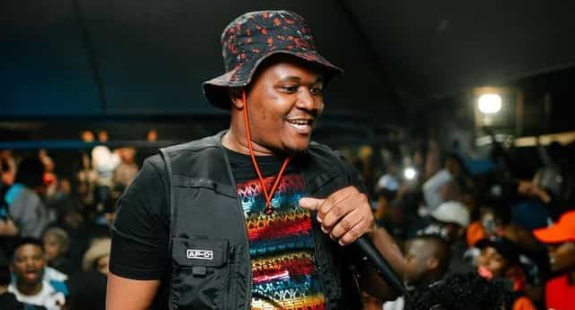 It’s been an emotionally overwhelming day in South African as we lay, Mpura, one of the stars who lost his life at the accident that claimed six lives on the N4 to Rustenburg. Today, he is being laid to rest in Protea, Soweto.

Mbongezi’s mother also read out a birthday card she received from him. In the card, he prayed that God grants her many more years.

“Last birthday card from Mongezi and it reads as follows. Wishing you an amazing birthday, filled with love, joy, happiness and wealth. I pray that God protects you and it gives you more blessed years. You are such an amazing mom. I love you so much. May your day be special as you are.
Love Mongezi.”

One of Mpura’s mentors and friends in the music industry Riky Rick also spoke at his funeral. The rapper said that nothing can ever prepare anyone for such moments in life.

“I’m sad that I’m not a stranger to moments like these. You would’ve lived a lucky life, or an extremely lonely life. If you haven’t experienced the tragedy of loss, the pain of losing a brother, a sister, a friend or a child.

Common sense tells us that the more we experience a situation, Mhlabe we will be more prepared next time. We are faced with a similar circumstance. Kodwa, death doesn’t really have common sense.”

Makhado continued and said that we have to have faith. Even in times such as these.

“There’s not much more I can say about Mpura’s music that hasn’t been said by the millions of people that mourn him. But what I can say, is his real talent was not on the microphone. His real talent was to make everyone around him realise that life was meant for living.

He could make you laugh when you really felt like crying. He would pick you up when he told you that the world was collapsing in front of you. When you had no more hope, he’d look you in the eyes and say, don’t worry grootman, you’ll operate this one.”

His family also shared his last song which was supposed to be released.

Lady Du speaks on the hit song she has with Mpura titled Umsebenzi Wethu and how that song ended up being recorded. #MpuraFuneral #Mpura