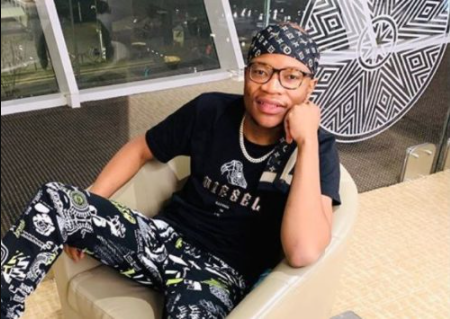 Yesterday, the beautiful and talented actress Thuli Phongolo infuriated a few of Master KG’s fans, when she denied dating him. What made many angry is the way she said it, making it seem as though the Jerusalema hitmaker is not her type.

After commenting on Master KG’s tweets, Thuli got linked to him but she quickly poured cold water to those claims. “Is it a bad thing for always falling for people older than you as A Guy?” asked Master KG, to which Thuli responded by saying, “Bathong nana, of course!” she said.

Shortly after, the dating rumours swirled. Thuli responded by saying, “Apparently, I’m dating MasterKG because I commented on his tweet! Guys, please respect me!” she laughed. She also tried to not make it seem as though she was being disrespectful to him and said he is just a friend, “I love @MasterKGsa but we’re friends, stop it! Stop it lona!”

After receiving backlash because of the “respect me please”, Thuli then added, “I mean ‘respect me’ as in stop spending baseless rumours! Hayibo nina, angisadlali! (I’m not playing anymore.)

I love @MasterKGsa but we’re friends, stop it! Stop it lona! 😩😂

One of the commenters called out Thuli for being “rude”, saying that is why Murdah Bongz dumped her for DJ Zinhle. Thuli laughed off those claims and said she and Murdah never happened. “I can’t help but laugh at this JOKE! To make things clear, such a thing NEVER occurred. This is why I’ve chosen to rectify silly rumours! Don’t amuse yourself with lies!”

I can’t help but laugh at this JOKE! 🤣 To make things clear, such a thing NEVER occurred. This is why I’ve chosen to rectify silly rumours! Don’t amuse yourself with lies! 😌

Master KG came to Thuli’s defense saying he does not feel disrespected by Thuli’s remarks because she meant well. “Me and @Thuli_P We good… We talk and we cool buds..so I don’t think she was undermining me or anything with that post… Because we respect each other for sure,” he said. Master KG also clarified that they are not an item, “And we just spoke an hour ago we good and we ain’t dating for sure.”

Thuli had been linked to numerous ZAlebs before and they include Black Coffee, Duduzane Zuma, Murdah Bongz, Eric Macheru and Raphael Griffiths.

All of these dating rumours were never addressed, but Duduzane spoke about them. The married politician said, “Thuli is a beautiful young woman, doing her thing, and l wish her all the best. I don’t know her and l have never met her,” he said to Mac G.

On her love life, Thuli spoke about how she had given up hope of ever finding love in South Africa.

Taking to Instagram to vent, Thuli revealed that she is happy and that she is spiritually aligned and is fulfilled by her family as well as career. But there is that aspect of her life which is missing, saying no man in South Africa can fulfill it.

“The happiness and peace I’m experiencing right now! My life journey is heading towards my desired direction. I’m so spiritually aligned. My loved ones fulfill me. My work is in order. I’m gradually dealing with mishaps with a sense of calmness. I’m genuinely enjoying life. Grateful!

“In terms of love, I don’t think I’ll win in S.A unless a miracle happens but ke angifuni shame. Ha ke batle, immediately no,” she said.