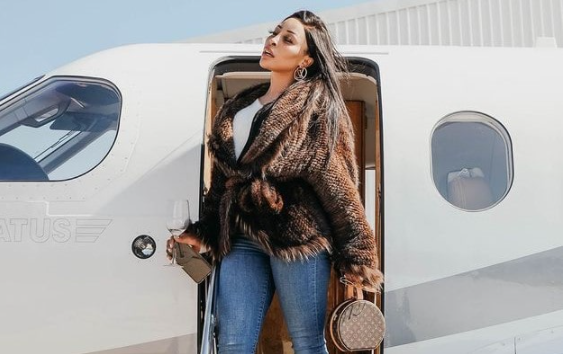 South Africa’s original slay Queen, Khanyi Mbau is out living her best life with her bae in Dubai. The two have been in the Middle Eastern nation for over a week. Gushing about her bae not so long ago, Khanyi said that her man has made her life a fairytale and that he has restored her faith in love.

“All you have done is make every day a fairy tale. You have mended this heart and made being in love such bliss.” She gushed about him. My eyes are constantly filled with tears, tears of joy from the disbelief of how my life has turned out. I said I want Dubai you said let’s go now! You have restored my faith. You are perfectly imperfect and all my loses have been restored in you.” She said.

Chatting to Sizwe Dhlomo on Kaya FM, Khanyi revealed that she usually goes for wealthier men because she knows what she wants. She adds that people are not always honest about what they want.

“The thing is with my relationships I treat them like how I buy a car or a house … you know what you want in the house. I know what my requirements are and I’m not going to back down.

“So many people confuse relationships and say, ‘Ah, I’m looking for love’ and two months down the relationship they’re looking for something else and that’s why they’ll never win because you haven’t made it clear what you want,” as quoted by TshisaLive.

Speaking about her ex-lover Tebogo of more than ten years, she said that he broke her heart, that’s why their relationship ended. “Dating toxic human beings that have money and don’t know who they are is mentally draining, I was at a point where I did not want to date rich men anymore.”

On dating Tebogo.“I wouldn’t have married him, if I wanted to marry him we would have a kid by now. We have been together for 10 years, it’s very rare for people to be together for 10 years. You can imagine what type of sex they are having to not have a child,” she said in part.

For the last year, Khanyi has been dating Zimbabwean millionaire Kudzai Mushonga. A few months back, she stunned her fans when she showed off what looked like an engagement ring on her finger. Although Khanyi only went public about their relationship a few months back, some sources claim that they have been going out for some time.

It is also reported that he has paid a million rands for Khanyi’s lobola. They are yet to confirm this publicly.