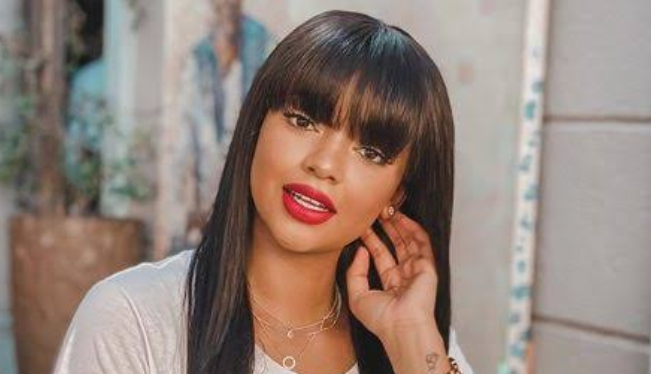 Beauty Influencer Mihlali Ndamase came under fire yesterday after she asked on a now-deleted tweet: “When are we looting Mec?”

Even though Mihlali later deleted her tweet and said she was joking, South Africans did not take kindly to her joke considering the ongoing lootings in the country.

Sithale said: “What Mihlali said instigates vandalism and looting, one of the wrongs that the President said will be punished. But because she is your fav we must turn a blind until it settles. When you say celebrities and influencers must speak out always leave a room for the likes of Mihlali to embarrass themselves”

“Idk why people are comparing jokes made by nobodies to ‘a joke’ made by a prominent influencer. Mihlali was on Forbes magazine because of her ability to influence masses of people into doing things she suggests that they do but today they are acting like her words have no impact.”

What Mihlali said instigates vandalism and looting, one of the wrongs that the President said will be punished. But because she is your fav we must turn a blind until it settles.

After being dragged and called out for her tweet, the multi-award-winning content creator eventually issued an apology.

She said she did not mean to be insensitive. Mihlali also expressed her love for the car brand, she said she has learned a lesson.

“With immediate retraction, I’d like to apologize on the tweet I published earlier. I jokingly put that out without considering the harm it may cause given my position. The intent wasn’t to be insensitive.

“Mercedes Benz is one of my favourite car brands, I adore them, hence the joke. Of course, I wouldn’t wish that on any business or person. This is a lesson learned and once again, I sincerely apologize,” tweeted Mihlali.

Her apology received mixed reactions, George said Mihlali did not have to apologize because other people have also joked about the situation.

“I totally respect the apology, but on the other hand, I feel like the people demanding this apology are really just haters. everyone at one point posted something that made light of the situation. let Mihlali live yall.”

Another Twitter user said Mihlali should be more careful when she tweets because she makes money off Twitter.

“Merc is a brand and I am certain they are concerned about the state of current affairs in SA and how they could be affected. Mimi is paid to post. She has an audience. Her tweets are currency. She must never be wreckless esp on this platform.”

Another one said it is hard being famous because you can’t just make jokes like other people. 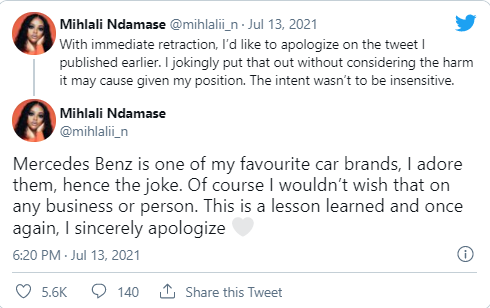 Letoya And Wife Have No Intention Of Paying Their Bolt Debt