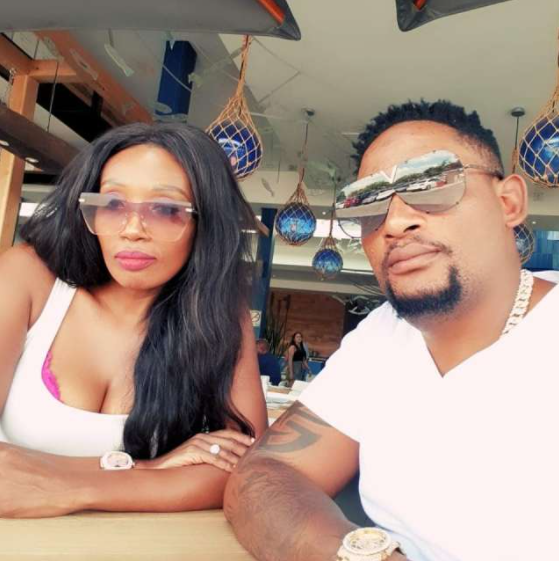 Actress Sophie Ndaba has been suffering in silence for far too long but her youngest son Lwandle “Ocean L” Ndaba has become her beacon of light. The 21-year-old music performance student, said in his statement that he has watched his mothers finances and health deteriorate as a result of the stress allegedly caused by her estranged and soon-to-be ex-husband Max Lichaba.

Following the release of his explosive diss track called ‘My Step Dad A Devil’ which has gained traction, Lwandle saw it necessary to explain in detail, the meaning behind the lyrics. He touched on numerous aspects including physical abuse, emotional abuse which consisted of body shaming and gaslighting.

The press release goes as follows, as quoted by Sunday World:

Regarding physical abuse and financial abuse, Lwandle wrote, “In their constant fights that we overheard(time and time again). Financial abuse: I witnessed the financial investment from day one into all of his businesses by my mother (KwaLichaba Soweto Chesa Nyama, LCR),” he wrote.

“Health issues: My mother spoke of diabetes in the media in order to hide the truth behind her weight loss- the weight loss was caused by stress.”

Max also allegedly emotionally abused her, “Constantly told her she was ugly after initially complimenting her on her beauty. He told her that she was ugly and nobody would want her. He told her he loved her voluptuous body and then body shamed her. There was a day she kicked him out of the house and removed his clothing and threw the clothes outside. She had found out about another Facebook affair he was pursuing and the fight was even audible to our immediate neighbours because it happened in and outside the house and he actually stressfully bumped one of his cars while reversing.

“We’re the kids in the house heard and saw everything because their voices were loud enough for even the neighbours to hear,” he continued.

“Isolation: Personally assessed that my mother really got sick and went into deep depression because Max and my oldest sister fell-out after she took my mum to the hospital and demanded that he pay for what he did to my mother. He said that my older sister has no right to instruct him “on how he should be caring for his wife”.

Lwandle then reveals that Max would apparently gaslight her constantly saying she invested 1 million Rands into his Chesanyama called KwaLichaba in Soweto, which also covered the renovations. Sophie would then protect the restaurants reputation from the media when the staff would constantly complain about it.

“I once confronted my mother begging her to leave KwaLichaba as we have a home that she built-from-scratch: 20 years ago and I could see that this relationship was deteriorating her health and I didn’t want to lose my mother,” he explained.

He then recounts the many instances where Max would allegedly abuse Sophie:

“I lived and shared a home with Max Lichaba and my mother Sophie Ndaba -I witnessed an instance where my mother took shelter by locking herself into a guest bedroom for fear for her life. -Max proceeded to break open the door before my eyes… all of those present in the house watched this happen, including our helper/ domestic worker.

“How can he speak of respecting women due to having a daughter and sisters. When he punched Sophie’s tiny body in front of his sister and bodyguard at KwaLichaba Vaal? Because she refused to serve his traffic cop girlfriend and her friends in VIP was just one of many instances where my mother was being forced to serve Max’s many girlfriends that the staff knew of, but my mother was unaware and the staff would divulge these details to me because we are peers and they were concerned staff members.”

Lwandle also reveals that Max took his car which his mother gifted him with as he had difficulty travelling to school. Max then allegedly went behind their backs and pawned the fully paid vehicle. Lwandle now drives the car his father, Themba Ndaba bought him.

Lwandle then said his mother suffered a stroke because she received a message from a man alerting her that Max was sending nudes to his wife. “They were of Max’s private parts because I overheard the fights in the house.”

Concluding his press release, Lwandle said on their wedding anniversary, Sophie found out that Max had allegedly impregnated another woman.

“My mother on her wedding anniversary found out and informed my Aunt of this girlfriend who kept calling Max to come clinic appointment. My mom spoke to her by answering the phone. The woman was angry on the phone assuming it’s Max who answered and blurted out “Max, I didn’t make this baby alone, Sophie doesn’t own you, I’m waiting at the clinic!”

“I was in Bloemfontein who I was visiting at the time and she was sobbing and screaming on the phone that “it’s enough!”. My mother at the time was in Kimberly with Max -My aunt begged mom to leave immediately and my mother agreed but did not pitch. -It was impossible not to over this conversation as we were in the lounge with my with cousins and my aunt was in the kitchen cooking lunch, and on speaker unexpecting this horrific message.

“She started screaming and fell onto the floor sobbing. We were boys in house and we’re helpless. I knew my mom was in trouble,” he revealed.

Kelly Opens Up About Her Vaccine Experience