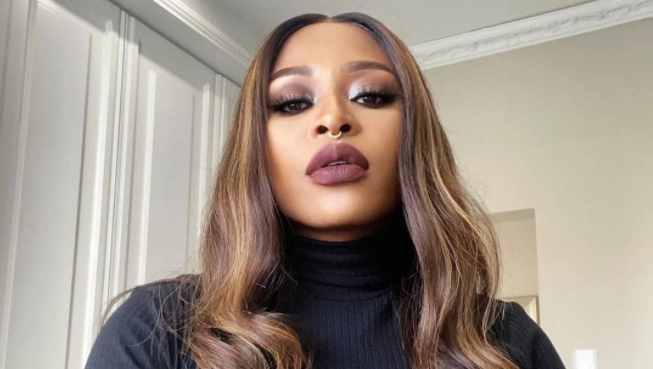 DJ Zinhle treated her fans to an honest QnA where she divulged a few details about her relationship with Murdah Bongz and her preference when it comes to the men she dates.

The 37-year-old (turning 38 in December) businesswoman and DJ revealed that age is nothing but a number in her relationships but she has a preference – they have to be younger.

We saw it with her public relationship with her baby daddy Kiernan ‘AKA’ Forbes who is 33-years-old. Their relationship did not end well as they were on and off but out of it came a beautiful baby girl by the name of Kairo Forbes.

Zinhle is rumoured to be pregnant again and is apparently excited about it. Her current partner Bongani from Black Motion is said to be treating her better than AKA ever did when she was carrying his child.

Bongz is also younger than Zinhle as he too is 33 years of age. See the pattern there? Both of them are 4 years younger than mama Ka Kairo.

In her Instagram QnA, Zinhle asked her followers what would they like to know about her and she decided to be a little transparent and break her own rules of being private. A fan asked, “Does age matter in who you date?” to which Zinhle responded by saying “No. But I prefer younger men,” she laughed. 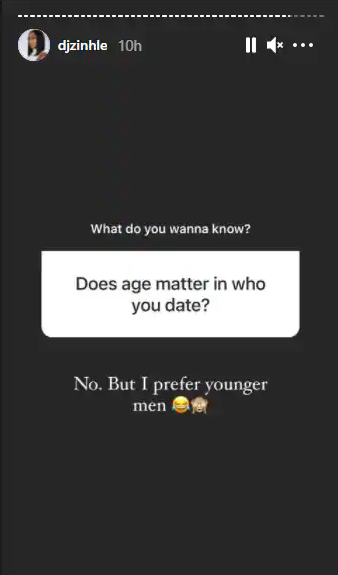 Another one of her cute responses to a questions asking about how did she know Bongz liked her, will have you reaching for the tissues. “How did Bongani show you that he likes you?” a fan asked.

According to Zinhle, Bongani swept her off her feet by using one of her old records to sample an old letter she wrote for her father just after he died in 2010. She had even forgotten about the letter which made the surprise even more emotional.

“I found a vinyl record from my old collection, on the cover was a letter I wrote to my dad after he died in 2010. I don’t even remember writing that letter but I was super emotional when I found it. Bongani took the record, sampled it and made a song for me,” she answered. 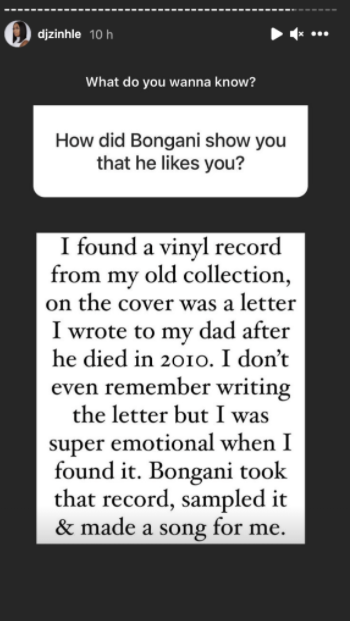 Murdah probably is the best thing to happen to Zinhle romantically as she had previously stated before how incredibly grateful she is of him.

Speaking about how she is stupid in love, she told Somizi that she wants to find put about a person herself instead of being told. She and bestie Pearl were guests at Dinner at Somizi and she said, “I think I’m still stupid in love. I’m the dumbest. If the heart is starting to ‘Umlilo’ I’m inside.” She told Somizi.” And that’s where I find that I and Sthe (Pearl Thusi) differ. Sthe questions first but I go in headfirst. I’ve found that with me I don’t want to be told. I want to find out for myself. Then after I’ve experienced for myself I’ll be alright.”

She added, “And it’s not just romantic relationships. I don’t take someone else’s words as facts. I want you to prove yourself to prove to me. I’m just a hopeless romantic. I’m a sucker for love.”